Get a Daily Email from Matthew Henry

Who is Matthew Henry? 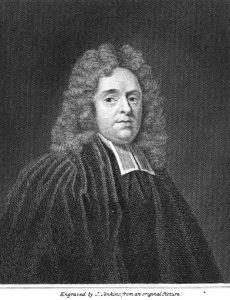 Matthew Henry (1662-1714), beloved commentator on the Scriptures, was born near Whitchurch (Salop), England. [For those unfamiliar with English geography, Whitchurch (Salop) is about 18 miles south, southeast of Chester, not too far from the border with Wales, and located in the area today known as Shropshire.] He began preaching at the age of 23 and spent most of his ministry as pastor of a church in Chester (1687-1712). He was a prolific writer, most famous for his Commentary on the Whole Bible which he began in November of 1704 and left incomplete upon his death. Ministerial colleagues concluded the work with reference to his notes and writings (Henry had finished the commentary from Genesis through Acts).

Throughout his life as a minister, Henry was a diligent student of the Word, sometimes rising as early as 4 o’clock in the morning and often spending 8 hours a day in his study in addition to his pastoral labors. He was also, however, a man of prayer. His lifelong concern for prayer is said to have originated with his recovery from a potentially terminal illness at the age of 10. Whatever the case, the whole of his labors is marked by the wisdom which only those who are habitually dependent upon the Almighty in prayer may hope to attain.

Henry completed a book on prayer in March of 1712, just two months before leaving Chester (where he had served for 25 years) to pastor a church in London. Hence, it reflects a lifetime of prayer, ministry, and Christian experience. Its full title was A Method for Prayer with Scripture Expressions proper to be used under each head. In it, Henry lays down an outline of a plan for prayer (Adoration, Confession, Petition, Thanksgiving, Intercession, and Conclusion) and supplies the contents of prayer from the Scriptures themselves.

Signup to get daily prayer emails